All Week: RING the CHURCH BELL!Would you like to ring the bell at church? We want to ring it every day, so we’re asking for volunteer bell-ringers. The front door is open 24/7 and we need volunteers for Monday, Tuesday, Thursday, Saturday and Sunday. We have Wednesday and Friday covered. Ideally, ring the bell at noon. If you want to be on the schedule to ring the church bell, please contact the church. 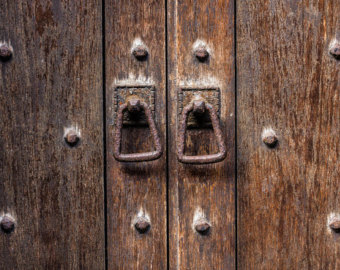 I wish in the city of your heart
you would let me be the street
where you walk when you are most
yourself. I imagine the houses:
It has been raining, but the rain
is done and the children kept home
have begun opening their doors.
― Robley Wilson


Be an opener of doors. ― Ralph Waldo Emerson

Look on every exit as being an entrance somewhere else.
― Tom Stoppard, Rosencrantz and Guildenstern Are Dead

If you feel you have to open a particular door, open it, otherwise all your life that door will haunt your mind! … All the doors you ignored or refused to enter represents your uncreated fates!  ― Mehmet Murat ildan

That door had a lot to say, people entered and people left but never the same! ― Jasleen Kaur Gumber

This being human is a guest house.
Every morning a new arrival.
A joy, a depression, a meaness,
some momentary awareness comes
as an unexpected visitor.
Welcome and entertain all!
Even if they’re a crowd of sorrows,
who violently sweep your house
empty of its furniture,
still, treat each guest honorably.
He may be clearing you out
for some new delight.
The dark thought, the shame, the malice,
meet them at the door laughing,
and invite them in.
Be grateful for whomever comes,
because each has been sent
as a guide from beyond.
— Jalal ad-Din Rumi

The same way one tells a recipe, one tells a family story. Each one of us has our past locked inside. — Laura Esquivel

The man who comes back through the Door in the Wall will never be quite the same as the man who went out. He will be wiser but less sure, happier but less self-satisfied, humbler in acknowledging his ignorance yet better equipped to understand the relationship of words to things, of systematic reasoning to the unfathomable mystery which it tries, forever vainly, to comprehend …  ― Aldous Huxley, The Doors of Perception

For the Yupik, all life was continuous, animal with human with ‘spirit’ and recognizing that continuum allowed them to undergo transformations that we, locked into our disappointingly Cartesian skins, find impossible even to imagine. — John Burnside

… a face is studied like a key
for the mystery of what it once opened …
— C.D. Wright (excerpt) from Floating Trees

It’s human nature that we come in our own flavours, and it doesn’t make sense to write a monochromatic or monocultural story unless you’re doing something extremely small—a locked room-style story. — N.K. Jemisin

I have to live within my memories, within my private universe, and continually return to China, the land where my thoughts are locked. This is a very painful kind of existence, this feeling of nowhereness. — Ma Jian

We are tired of being beaten by policemen. We are tired of seeing our people locked up in jails over and over again. And then you holler, ‘Be patient.’ How long can we be patient? — John Lewis

There’s a lot of conflict and darkness inside everybody’s family. We all pretend to outsiders that it’s not so, but behind locked doors, there are usually high emotions running. — Salman Rushdie

People —running from unhappiness, hiding in power — are locked within their reputations, ambitions, beliefs. — Richard Avedon

Custom is a prison, locked and a barred by those who long ago were dust, the keys of which are in the keeping of the dead. — Robert Green Ingersoll

Pass It On, III — Rachel Hades
… Death makes life shine:
a tiredness, a flickering between
ages, which is each age;
a piling up to tottering
and falling back to sand.
So much for cycle. The front door lock
sticks each fall when we’re first back.
We are advised to oil it.
Olive oil in the keyhole:
again the old key turns.
Once again to meander
… Ideas of the eternal,
once molten, harden; cool.
Oil, oil in the lock.
The old key turns.

The ultimate wisdom which deals with beginnings, remains locked in a seed. There it lies, the simplest fact of the universe and at the same time the one which calls faith rather than reason. — Hal Borland

The living cell almost always contains, locked in its interior, the visible or invisible products of its physiological activity or its nourishment. — Albrecht Kossel

The universe is like a safe to which there is a combination. But the combination is locked up in the safe. — Peter De Vries