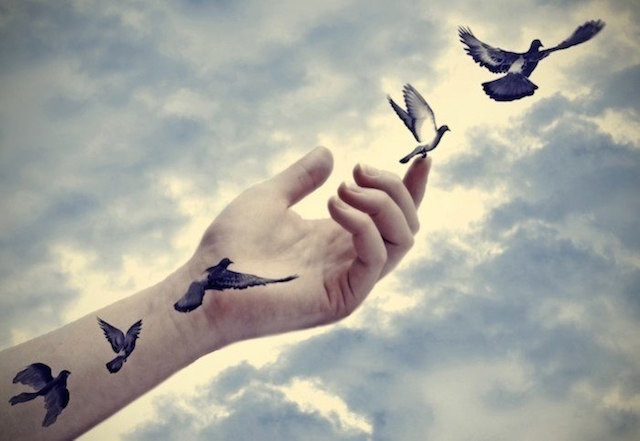 Reflections as we approach July 4th weekend: who is free, who is not free? Themes of spiritual freedom versus civic freedom … pondering Abraham’s obedience to Yahweh, willingness to sacrifice a child, the merciful intervention that freed him from such an act. What is asked of us? What is offered to us? 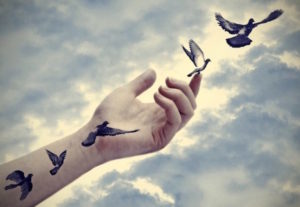 My father always said, Malala will be free as a bird. — Malala Yusufzai

Bondage — Laura Lee Bird
We have lived, been more forgotten,
Than ever you will be,
We have lived, like you, remembering,
That you too were not free —

That for all the brilliant rustling
Of pinions, and the sound
Of a lifted mystic singing
You could not leave the ground.

Until all cords were broken
You were not wholly one
With the earth-forgotten mortals
Whose being is the sun.

The only way to deal with an unfree world is to become so absolutely free that your very act of existence is an act of rebellion. — Albert Camus

The work of art is a scream of freedom. — Christo

Dance, when you’re broken open. Dance, if you’ve torn the bandage off. Dance in the middle of the fighting. Dance in your blood. Dance when you’re perfectly free. ― Jalaluddin Rumi

I had crossed the line. I was free; but there was no one to welcome me to the land of freedom. I was a stranger in a strange land. — Harriet Tubman

Freedom is not given to us by anyone; we have to cultivate it ourselves. It is a daily practice… No one can prevent you from being aware of each step you take or each breath in and breath out. — Thich Nhat Hahn

I always say I’m so disciplined in my writing because very strict discipline is the only way I’ve found any freedom as an artist. Like meditation or in my spiritual journey, or exercise – hiking … — Anne Lamott

Every human has four endowments – self-awareness, conscience, independent will and creative imagination. These give us the ultimate human freedom … the power to choose, to respond, to change. — Stephen Covey

Freedom is what you do with what’s been done to you. — Jean-Paul Sartre

Between stimulus and response, there is a space. In that space is our power to choose our response. In our response lies our growth and our freedom. — Victor Frankl

The struggle is my life. I will continue fighting for freedom until the end of my days. — Nelson Mandela

It is difficult to free fools from the chains they revere. — Voltaire

Education is a human right with immense power to transform. On its foundation rest the cornerstones of freedom, democracy and the sustainable human development. — Kofi Annan

All the great things are simple and many can be expressed in a single word: freedom, justice, honor, duty, mercy, hope. — Winston Churchill

The courage to let go of the door, the handle.
The courage to shed the familiar walls whose very
stains and leaks are comfortable as the little moles
of the upper arm; stains that recall a feast,
a child’s naughtiness, a loud blattering storm
that slapped the roof hard, pouring through.

The courage to abandon the graves dug into the hill,
the small bones of children and the brittle bones
of the old whose marrow hunger had stolen;
the courage to desert the tree planted and only
begun to bear; the riverside where promises were
shaped; the street where their empty pots were broken.

The courage to leave the place whose language you learned
as early as your own, whose customs however dan-
gerous or demeaning, bind you like a halter
you have learned to pull inside, to move your load;
the land fertile with the blood spilled on it;
the roads mapped and annotated for survival.

The courage to walk out of the pain that is known
into the pain that cannot be imagined,
mapless, walking into the wilderness, going
barefoot with a canteen into the desert;
stuffed in the stinking hold of a rotting ship
sailing off the map into dragons’ mouths,

Cathay, India, Siberia, goldeneh medina
leaving bodies by the way like abandoned treasure.
So they walked out of Egypt. So they bribed their way
out of Russia under loads of straw; so they steamed
out of the bloody smoking charnelhouse of Europe
on overloaded freighters forbidden all ports—

out of pain into death or freedom or a different
painful dignity, into squalor and politics.
We Jews are all born of wanderers, with shoes
under our pillows and a memory of blood that is ours
raining down. We honor only those Jews who changed
tonight, those who chose the desert over bondage,

who walked into the strange and became strangers
and gave birth to children who could look down
on them standing on their shoulders for having
been slaves. We honor those who let go of every-
thing but freedom, who ran, who revolted, who fought,
who became other by saving themselves.

Join us at 4pm for a short musical concert focused on peace and Christmas cheer! Warmups in sanctuary beforehand, and then we formally begin at 4pm. ... See MoreSee Less

Join us for scripture, song, prayer and reflection during this second Sunday in Advent - Peace. We meet in person and over zoom. ... See MoreSee Less