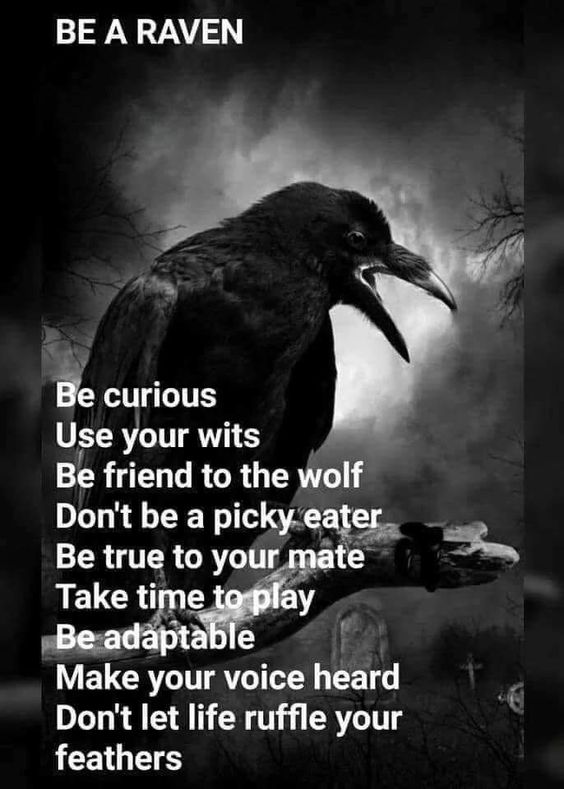 Did ever raven sing so like a lark, That gives sweet tidings of the sun’s uprise? — William Shakespeare

The raven spread out its glossy wings and departed like hope. — Cecilia Dart-Thornton

Ravens are at home everywhere. They only have one enemy: humans. — Bernd Heinrich

Death makes angels of us all and gives us wings where we had shoulders smooth as ravens claws. — Jim Morrison

Does wisdom perhaps appear on the earth as a raven which is inspired by the smell of carrion? — Friedrich Nietzsche

My love, she’s like some raven / At my window with a broken wing. — Bob Dylan

But the black raven, the bird over the fated men, will tell, will say to the eagle, how he succeeded at the meal, when he with the wolf plundered the slaughtered ones.  — The Beowulf Poet

For this reason, the lean wolf in the wold / rejoiced, and the dark raven, a bird greedy for slaughter. — Cynewulf

It is said that when Raven created the first world, he made everything perfect, a world full of happiness and beauty, without pain, suffering, or ugliness. But Raven grew bored with this perfect world and started reshaping things. — Catharine Feher-Elston

One raven does not peck out another’s eyes. — Danish proverb

Censure acquits the raven, but pursues the dove. — Juvenal

The cry of a young raven is nothing but the natural cry of a creature, but your cry, if it be sincere, is the result of a work of grace in your heart. — Charles Spurgeon

Ravens are the birds I’ll miss most when I die. If only the darkness into which we must look were composed of the black light of their limber intelligence. If only we did not have to die at all. Instead, become ravens. — Louise Erdrich

Commentary on Elijah and the Ravens

Elijah had enough, but it did not always come to him in the nicest way; for I do not imagine that the ravens knew how to get bread and meat always cut into nicest shape. Perhaps they snatched a rough bit of meat here, and perhaps a crust of bread there, and it came in all sorts of ugly pieces, but still, there it was, and it was enough. “Beggars are not to be choosers,” we say, and certainly pensioners on God’s bounty ought not pick holes and find fault with the Lords providing. Whatever God gives thee be grateful for, for if too proud to take from the raven’s mouth, it will be well for thee to go without, until shine hunger consume thy pride. God promises his people enough, but not more than enough, and even that enough may not come to us in the way we should choose. — Charles Spurgeon

God knows what you need, and he knows when you need it, and he will make sure you have it in time. As he sent the ravens to Elijah, he can command all heaven to come to your aid … God lets those things happen to move us from self-sufficiency to God-sufficiency. From self-reliance to God-reliance. From trusting in our own ability to trusting in him alone. … You should plan ahead. That’s biblical. You should plan ahead but you shouldn’t worry ahead. There’s a big difference … we would have been less surprised if God had used a robin redbreast or a meadowlark or a turtle dove to bring the food. But that is not how God works. He routinely chooses the despised things of the world in order to confound the mighty, and he uses the foolish to bring the strong down to nothing. As you look at the course of life, you may think that God is going to use some rich uncle or a wealthy friend to help you out. But experience shows how unlikely that is. He is much more likely to meet your needs through the ravens of the earth that fly to your need when you least expect them. — Ray Pritchard

Raven and the First Men —Bill Reid, qadasgu qligawaay clan (Haida Origins Story)
Haida stories tell of how the first people emerged from a gigantic clamshell on the beach of Rose Spit. They got out with the help of Raven, the most powerful creature from myth time. Raven was wandering on the beach, when he heard some noise coming from a clamshell. He looked more closely and saw that it was full of little human creatures. They clearly looked terrified by Raven and the great big world outside the shell.

“So the Raven leaned his great head close to the shell, and with the smooth trickster’s tongue, that had got him out of so many misadventures, in his troubled and troublesome existence, he coaxed and cajoled and coerced the little creatures to come out and play in his wonderful, shiny, new world.”

Fable: Fox and Raven
by Phaedrus
Retold by Rohini Chowdhury
Once, the Raven saw a piece of cheese in a window, and grabbing it in his beak, flew off quickly to a nearby tree, there to savour it and eat it in peace.

Now the Fox, who was passing by, was very fond of cheese, and when she saw the cheese in the Raven’s beak, she determined to have it for herself. Going up to the foot of the tree, she called up to the Raven, ‘Oh my dear friend, how wonderful you look today! You are the handsomest bird I have ever seen. Oh the shine of your feathers, the regal grace with which you hold you hold your head! Your voice must be as beautiful as you! If only I could hear you sing…’ and the Fox sighed, as though with longing.

The Raven was deeply flattered. No one had called him handsome before, or wanted to hear him sing! Surely he could please this kind Fox and sing a little song for her! Taking a deep breathe, he opened his beak…and let fall the piece of cheese. The first caw was not even out of his throat when the Fox had snapped up the piece of cheese and run off through the woods with it! 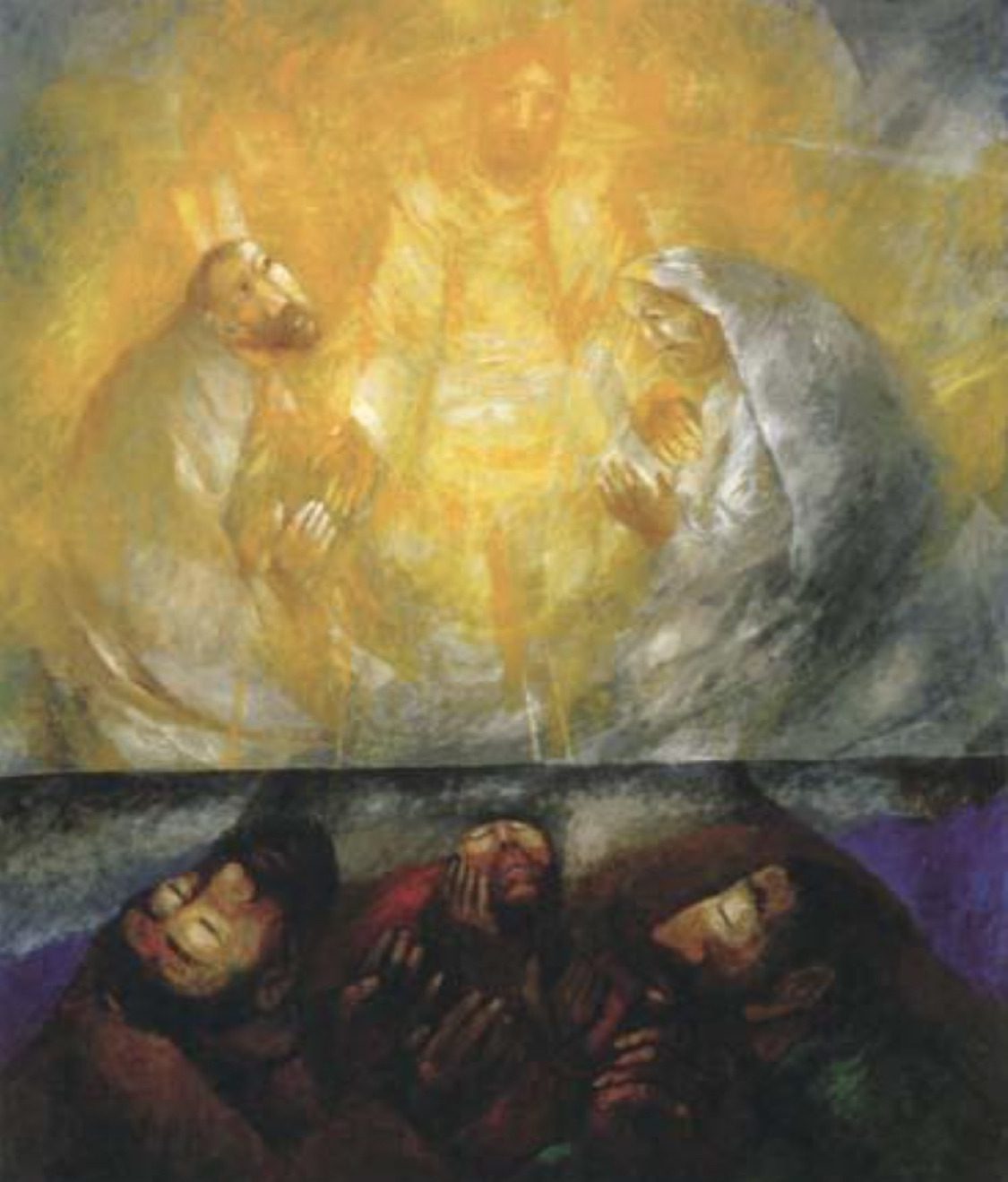 We consider a story of transformation from Mark 9, echoing stories of Moses and Elijah and Daniel, wherein we glimpse a transcendence that changes everything. What do you want to change in your life? In this world? What is powerful enough to initiate transformation within you?