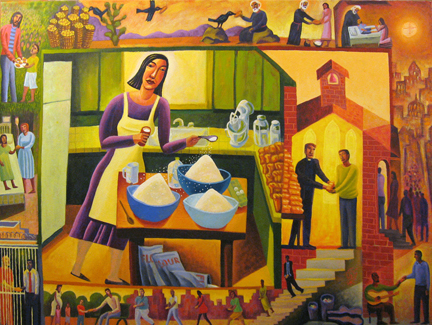 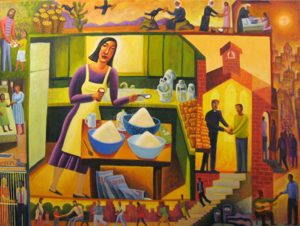 Small and precious things found in sacred stories,
with the power to grow exponentially:
yeast, fish, pearls, seeds, and other treasures in the kingdom of God.

Meditations on Kingdom of God

God is the Possessor of the Kingdom: whoever lays his head before Him, to him he gives a hundred kingdoms without the terrestrial world; but the inward savour of a single prostration before God will be more sweet to you than a hundred empires: then you will cry in humble entreaty, “I desire not kingdoms: commit unto me the kingdom of that prostration.— Rumi

You’re just left with yourself all the time, whatever you do anyway. You’ve got to get down to your own God in your own temple. It’s all down to you, mate. — John Lennon

After all,” Anne had said to Marilla once, “I believe the nicest and sweetest days are not those on which anything very splendid or wonderful or exciting happens but just those that bring simple little pleasures, following one another softly, like pearls slipping off a string.” ― L.M. Montgomery, Anne of Avonlea

Full fathom five thy father lies; Of his bones are coral made; Those are pearls that were his eyes: Nothing of him that doth fade, But doth suffer a sea-change Into something rich and strange. — Shakespeare

At the edge of madness you howl diamonds and pearls. — Aberjhani, Journey through the Power of the Rainbow: Quotations from a Life Made Out of Poetry

The act of fishing – for fish, dreams or whatever magic is available – is enough. ― Fennel Hudson, Traditional Angling – Fennel’s Journal – No. 6

Teach all men to fish, but first teach all men to be fair. Take less, give more. Give more of yourself, take less from the world. Nobody owes you anything, you owe the world everything. ― Suzy Kassem, Rise Up and Salute the Sun

The trout is still with me, as are my memories. The future is somewhere between these two forces, but it lives in mystery. The river records to trail behind or before me, and covers everything as it flows. This mountain and this river are old … ― Daniel J. Rice, The Unpeopled Season

“He can’t have gone,” he said “Christ know he can’t have gone. He’s making a turn. Maybe he has been hooked before and he remembers something of it.” Then he felt the gentle touch on the line and he was happy.”
― Ernest Hemingway, The Old Man and the Sea

All men cannot go to college, but some men must; every isolated group or nation must have its yeast, must have, for the talented few, centers of training where men are not so mystified and befuddled by the hard and necessary toil of earning a living as to have no aims higher than their bellies and no God greater than Gold. — W.E. B. DuBois

Enthusiasm is the yeast that makes your hopes shine to the stars. Enthusiasm is the sparkle in your eyes, the swing in your gait. The grip of your hand, the irresistible surge of will and energy to execute your ideas. — Henry Ford

You can’t just leave out one part; the bread won’t rise if the yeast isn’t there. — Holly Near

I Ask My Grandmother If We Can Make Lahmajoun
— Gregory Djanikian

Sure, she says, why not,
we buy the ground lamb from the market
we buy parsley, fresh tomatoes, garlic
we cut, press, dice, mix

make the yeasty dough
the night before, kneading it
until our knuckles feel the hardness
of river beds or rocks in the desert

we tell Tante Lola to come
with her rolling pins we tell
Zaven and Maroush, Hagop and Arpiné
to bring their baking sheets

and eating and tasting again
everything that has already
been written
into the body.

In the midst of difficult times, uplifting choices like this remind us about how we can support each other! Cassandra is a member of our extended church Family, and she reminds us of what is possible! ... See MoreSee Less

These military moms found a way to serve and help with the formula shortage.
View on Facebook
· Share