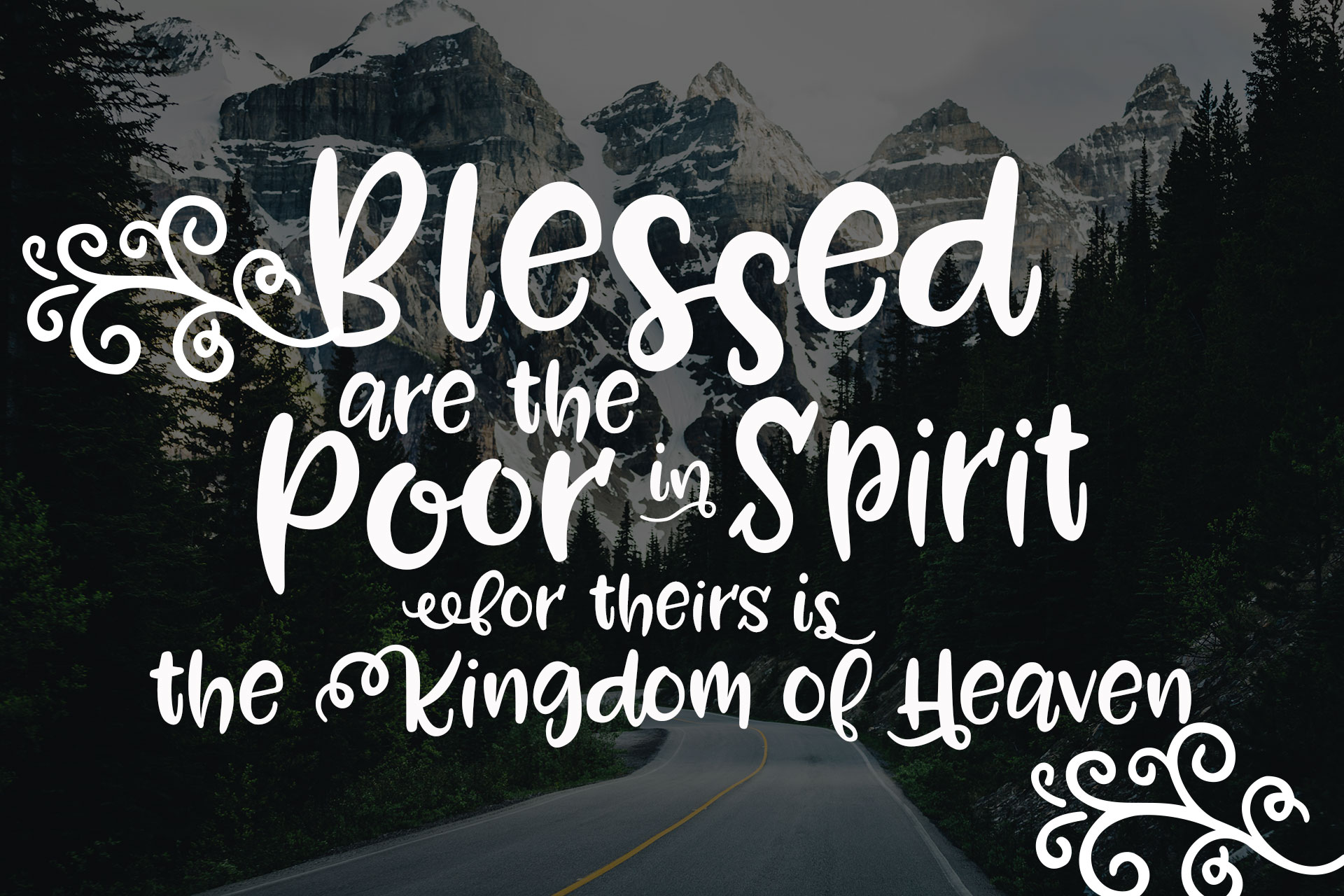 Scripture for the FIRST FULL WEEK of LENT from Matthew 5: Blessed are the poor in spirit, for theirs is the kingdom of heaven.

Beatitudes describe a state of blessedness. In the original Greek used to write the Gospel of Matthew, the word for blessing is makarios (singular) and makaroioi (plural). It is used outline the Beatitudes offered to us by Christ.

Blessedness doesn’t mean you’re lucky, like you’ve won the lottery. It also doesn’t mean you’ve earned what is offered. In our Christian understanding, blessings are gifts offered to you. They come in the form of grace.

The scholar Jeff Stoffregen offers a history of how people used to understand blessedness. Originally, blessings belonged only to gods: supernatural entities who lived in a ‘state of happiness and contentment … beyond all cares, labors, and even death… in some other world away from the … problems and worries of ordinary people’ Later blessed ones were ‘humans, who, through death, had reached the other world of the gods… beyond the cares and problems and worries of earthly life.’ They were also denoted as saints. Eventually, blessedness referred to ‘elite … wealthy people … whose riches and power put them above the normal cares and problems … struggle and worry and labor in life.’ Finally, blessedness was attributed to people who were righteous, who then ‘received earthly, material things: a good wife, many children, abundant crops, riches, honor, wisdom, beauty, good health. A visible sign of blessedness was to ‘have big and beautiful things.’

Christ described the state of blessedness in a new, different way. He turned everyone’s expectations upside down. Blessedness didn’t belong to ancient gods or to saints who had passed beyond death into the land of the gods. Blessedness is not restricted to the elite and powerful classes or the sole province of the righteous. Blessedness belongs to everyone.

Christ teaches that blessings are available, and already part of the lives, of common people. Those who experience the challenges of human life — suffering, poverty, oppression, hunger, illness, sorrow — as well as its joys and delights. Common people like us. Blessedness is offered to you and me. — Rev Gail

Sometimes I need
only to stand
wherever I am
to be blessed.
― Mary Oliver

Gratitude lifts our eyes off the things we lack so we might see the blessings we possess. — Max Lucado

What I love about the ministry of Jesus is that he identified the poor as blessed and the rich as needy…and then he went and ministered to them both. This, I think, is the difference between charity and justice. Justice means moving beyond the dichotomy between those who need and those who supply and confronting the frightening and beautiful reality that we desperately need one another. ― Rachel Held Evans

Challenge or Question: Identify a blessing within your life. One aspect of your life for which you are grateful. Give thanks for it. Say a prayer, write it in a journal, or light a candle to acknowledge this blessing.

Highlights include an Interview with Alice Pepper by Meg Phillips and Gail Doktor, acapella choral performance of 'Canon' and leadership by the Battenfelder family. Come for scripture, prayer, message and music! ... See MoreSee Less