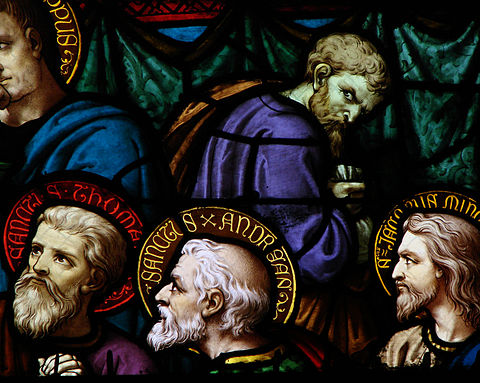 21 After saying this Jesus was troubled in spirit, and declared, “Very truly, I tell you, one of you will betray me.” 22 The disciples looked at one another, uncertain of whom he was speaking. 23 One of his disciples—the one whom Jesus loved—was reclining next to him; 24 Simon Peter therefore motioned to him to ask Jesus of whom he was speaking. 25 So while reclining next to Jesus, he asked him, “Lord, who is it?” 26 Jesus answered, “It is the one to whom I give this piece of bread when I have dipped it in the dish.”[a] So when he had dipped the piece of bread, he gave it to Judas son of Simon Iscariot.[b] 27 After he received the piece of bread,[c] Satan entered into him. Jesus said to him, “Do quickly what you are going to do.” 28 Now no one at the table knew why he said this to him. 29 Some thought that, because Judas had the common purse, Jesus was telling him, “Buy what we need for the festival”; or, that he should give something to the poor. 30 So, after receiving the piece of bread, he immediately went out. And it was night.

Never be afraid to trust an unknown future to a known God. – Corie ten Boom

You must trust and believe in people or life becomes impossible. – Anton Chekhov

Trust is the fruit of a relationship in which you know you are loved. – William P. Young

We’re paying the highest tribute you can pay a man. We trust him to do right. It’s that simple. – Harper Lee

People that have trust issues only need to look in the mirror. There they will meet the one person that will betray them the most. – Shannon Adler

Few things help an individual more than to place responsibility upon him, and to let him know that you trust him. – Booker T. Washington

“It was a mistake,” you said. But the cruel thing was, it felt like the mistake was mine, for trusting you. ― David Levithan

For there to be betrayal, there would have to have been trust first. ― Suzanne Collins

We cultivate love when we allow our most vulnerable and powerful selves to be deeply seen and known, and when we honor the spiritual connection that grows from that offering with trust, respect, kindness and affection.

Love is not something we give or get; it is something that we nurture and grow, a connection that can only be cultivated between two people when it exists within each one of them – we can only love others as much as we love ourselves.

Shame, blame, disrespect, betrayal, and the withholding of affection damage the roots from which love grows. Love can only survive these injuries if they are acknowledged, healed and rare. ― Brené Brown

To me, the thing that is worse than death is betrayal. You see, I could conceive death, but I could not conceive betrayal. ― Malcolm X

I’m not really sure why. But… do you stop loving someone just because they betray you? I don’t think so. That’s what makes the betrayal hurt so much – pain, frustration, anger… and I still loved … ― Brandon Sanderson

“One of the things that might set Judas apart from the rest of Jesus’s disciples is that Judas is not from Galilee. Jesus is from the northern part of Israel, or Roman Palestine. But [Judas’s] surname might be evidence that he’s from the southern part of the country, meaning he may be a little bit of an outsider.” — Robert Cargill Alternatively, others have suggested that the name Iscariot identified Judas with the Sicarii, or “dagger-men,” a group of Jewish rebels who opposed the Roman occupation and committed acts of terrorism circa A.D. 40-50 on behalf of their nationalist cause. But there’s nothing in the Bible to link Judas to the Sicarii, and they were known to be active only after his death. — History Channel

Judas was an ultimate tragedy—probably the greatest tragedy that ever lived. He is the perfect and prime example of what it means to have opportunity and then lose it. He becomes all the more terrible because of the glorious beginnings he had. Judas followed the same Christ as the others. For three years, day in and day out, he occupied himself with Jesus Christ. He saw the same miracles; heard the same words; performed some of the same ministries; was esteemed in the same way the other disciples were—yet he did not become what the others became. In fact, he became the very opposite. — John MacArthur

‘… when He had dipped the morsel, He took and gave it to Judas, the son of Simon Iscariot”.’ Jesus’ answer to Peter and John was really a final appeal of love to Judas. “The morsel” was a piece broken from some of the unleavened cakes that would be on the table as a part of the Passover feast. Also on the table would be a dish called cheshireth, filled with bitter herbs; vinegar; salt; and mashed fruit, consisting of dates, figs, raisins, and water—all mixed together into a pasty substance. They would eat it with the unleavened bread like a dip. It was very special for the host to dip a morsel into the cheshireth and give it to the guest of honor. And Jesus, kindly, in a gesture of love toward Judas, dipped the morsel and gave it to Judas, as if Judas were the guest of honor. One would think that all Jesus had done for Judas that night would have broken his heart, but it didn’t. Judas was an apostate. His heart was hardened, and nothing Jesus could do for him would break it. — John MacArthur

But the name “Judas” became synonymous with treachery in various languages, and Judas Iscariot would be portrayed in Western art and literature as the archetypal traitor and false friend. Dante’s Inferno famously doomed Judas to the lowest circle in Hell, while painters like Giotto and Caravaggio, among others, immortalized the traitorous “Judas kiss” in their iconic works. — History Channel

Jesus utters his most startling instruction … “For you will sacrifice the man who clothes me” … Judas will carry out the sacrifice that truly counts, the sacrifice that will result in salvation: He will sacrifice the physical body of Jesus, thus allowing Jesus to complete his mission. In this way, Judas does indeed become the greatest of the disciples… There is no mention of a trial, execution, or resurrection. The Gospel of Judas has related what it wanted to relate: The obedience of Judas and how that obedience assisted Jesus in fulfilling his salvific mission. Judas has been transformed from villain to hero, from traitor to saint.
The Gospel of Judas makes a meaningful contribution to our understanding of second-century Christianity, especially with regard to the question of diversity. We have here what may be a very early exemplar of Sethian Gnosticism, a form of Gnosticism that may have roots in Jewish pessimism that emerged in the aftermath of the disastrous wars in 66-70 and 115-117.8
It is highly unlikely that the Gospel of Judas preserves for us authentic, independent material, material that supplements our knowledge of Judas and his relationship to Jesus … dismisses the Gospel of Judas as having no value for understanding the historical Judas. — National Geographic