I drank at every vine, the last was like the first.
I came upon no wine so wonderful as thirst.
— Edna St. Vincent Millay

Upon your shattered ruins where
This vine will flourish still, as rare,
As fresh, as fragrant as of old.
Love will not crumble.
—  Eleanor Farjeon

Every object, every being, is a jar full of delight.
Be a connoisseur, and taste with caution.
Any wine will get you high.
Judge like a king, and choose the purest,
the ones unadulterated with fear,
or some urgency about “what’s needed.”
Drink the wine that moves you as a camel moves
when it’s been untied, and is just ambling about.
― Rumi

VINE as CONNECTOR & SOURCE of LIFE

Here it is in a nutshell: Old vines yield more concentrated fruit, resulting in richer wines with more sumptuous balance … Deep roots are a big asset too … — Beppi Crosario

May the children of the stock of Abraham who dwell in this land continue to merit and enjoy the good will of the other inhabitants – while every one shall sit in safety under his own vine and fig tree and there shall be none to make him afraid. — George Washington

Behold the rain which descends from heaven upon our vineyards; there it enters the roots of the vines, to be changed into wine; a constant proof that God loves us, and loves to see us happy. — Benjamin Franklin

Today I begin a new life. Today I shed my old skin which hath, too long, suffered the bruises of failure and the wounds of mediocrity. Today I am born anew and my birthplace is a vineyard where there is fruit for all. — Og Mandino

Vines and trees will teach you that which you will never learn from masters. — Bernard of Clairvaux

A person does not grow from the ground like a vine or a tree, one is not part of a plot of land. Mankind has legs so it can wander. ― Roman Payne

… you have vines and stars in your hair … ― Pablo Neruda

You are but a tiny cluster upon the vines of heaven, where the grapes are worlds; yet you hold the power to ripen your bitter berries and add to the eternal vintage of cosmic sweetness if so you will.  ― Eden Phillpotts

I guess it’s the same way trees grow around the very vines that are killing them, so they’re strangled and sustained all at once.  ― Lauren Oliver

Everything, a horse, a vine, is created for some duty. For what task, then, were you yourself created? A man’s true delight is to do the things he was made for. ― Marcus Aurelius

Plant no tree sooner than the vine. — attributed to Horace

Water is the mother of the vine, The nurse and fountain of fecundity, The adorner and refresher of the world. — Charles Mackay

Of all trees, I observe God hath chosen the vine, a low plant that creeps upon the helpful wall; of all beasts, the soft and patient lamb; of all fowls, the mild and guileless dove. Christ is the rose of the field, and the lily of the valley. When God appeared to Moses, it was not in the lofty cedar nor the sturdy oak nor the spreading palm; but in a bush, a humble, slender, abject shrub; as if He would, by these elections, check the conceited arrogance of man. — Owen Feltham

The vine . . . is not the root merely, but all – root, stem, branches, twigs, leaves, flowers, fruit: and Jesus is not only that: He is soil and sunshine, air and showers, and ten thousand times more than we ever dreamed, wished for, or needed. — James Hudson Taylor

isn’t it wonderful that two of the most sacred and symbolic plants, the olive and the vine, live on almost nothing, a terrace of limestone, sun and rain … —   Janet Erskine Stuart

Happiness is a vine that takes root and grows within the heart, never outside it. —  Khalil Gibran

Looking closely, we see the many entwined branches, winding their way around one another in intricate patterns of tight curls that make it impossible to tell where one branch starts or another one ends. This is not just intricate; it’s intimate, and the vine shares with its branches the nutrients that sustain it, the life force of the whole plant … this vine is one with the branches … we find the best grapes close in to the vine, “where the nutrients are the most concentrated.” … This kind of abiding … showers us with “shalom, which speaks of wholeness, completeness, and health.” Here, close to the vine, immersed in shalom, we find not only nourishment but also hope and joy.
— Kathryn Matthews

The duty of the branch is to cling to the vine. —  Max Lucado

Affliction brings out graces that cannot be seen in a time of health. It is the treading of the grapes that brings out the sweet juices of the vine; so it is affliction that draws forth submission, weanedness from the world, and complete rest in God. Use afflictions while you have them. —  Robert E. Murray

The biblical quote “each man under his own vine and fig tree” has been used to denote peace and prosperity. — Jennifer, Thoughts & Visions blogger

TREE of LIFE Across Cultures

For you placed the salvation of the human race on the wood of the Cross, so that, where death arose, life might again spring forth and the evil one, who conquered on a tree, might likewise on a tree be conquered, through Christ our Lord. — Liturgy of the Exaltation of the Cross (preface)

THE HISTORY OF THE TREE OF LIFE SYMBOL — one tribe apparel & treeremoval.com (these pop commcercial sites, the info has not been validated)

As a symbol, the Tree of Life … oldest known example was found in the Domuztepe excavations in Turkey, which dates back to about 7000 BC. … A similar depiction of the tree was discovered in the Acadians, which dates back to 3000 BC. The symbols depicted a pine tree, and because pine trees do not die, the symbols are believed to be the first depictions of the Tree of Life.

The Tree of Life also has strong significance to the Ancient Celts. It represented harmony and balance and was an important symbol in the Celtic culture. They believed it had magical powers so when they cleared their lands, they would leave one single tree standing in the middle. They would hold their important gatherings under this tree and it was a very serious crime to cut it down.

Multiple cultures have different mythologies involving the Tree of Life. References to the symbol have been found in Ancient Egypt, Ancient Iran, Ancient Mesopotamia and Urartu, and many more places. …

Buddhism – In Buddhism, the Tree of Life is known as the Bhodi-tree and is believed to be the Tree of Enlightenment.

Celtic Beliefs – The Tree of Life is a representation harmony and balance in nature. The Tree of Life, to the Celts, symbolized strength, a long life, and wisdom. The tree also represents rebirth, as it will lose its leaves during the fall season, hibernate throughout the winter, and will be reborn again once spring arrives. The Celts also believed that they actually came from trees, and considered them magical, living beings. Trees were said to guard the land and acted as a doorway into the spirit world. The Tree of Life connects the lower and upper worlds as its roots grow far down while its branches reach high. The tree trunk connects both of these worlds to the Earth’s plane. It was with this connection of worlds, that it was said that people are able communicate with the gods in the heavens using the Tree of Life.

Norse  … believed the source of all life on Earth was a world ash tree they called Yggdrasil. In the Norse tradition, the Tree of Life led to nine different worlds including the land of Fire, world of the dead (Hel) and the land of the Aesir (Asgard). Nine was an important number in both Norse and Celtic cultures.

The Mayans – According to this Mesoamerican culture, a mystical mountain on Earth was hiding Heaven. A World Tree connected Heaven, Earth and the Underworld and grew at the point of creation. Everything flowed out from that spot in four directions (North, South, East & West). On the Mayan Tree of Life there is a cross in the centre which is the source of all creation.

Christianity – The Tree of Life is featured in the Book of Genesis and is described as the tree of the knowledge of good and evil which was planted in the Garden of Eden. … The term ‘Tree of Life’ appears another 11 times in subsequent books of the Bible.

China – There is a Taoist story in Chinese Mythology which describes a magical peach tree that only produces a peach ever 3,000 years. The individual who happens to eat this fruit becomes immortal. There is a dragon at the base of this Tree of Life and a phoenix on top.

Islam – The Tree of Immortality is mentioned in the Qu’ran and is different from the Biblical account insofar as only one tree is mentioned in Eden which was forbidden … by Allah. The Hadith do mention other trees in heaven and while the tree symbol plays a fairly minor role in the Quran, it became an important symbol in Muslim art and architecture and is also one of the most developed symbols in Islam. In the Quran, there are a trio of supernatural trees: The Infernal Tree (Zaquum) in Hell, The Lote Tree (Sidrat al-Muntaha) of the Uttermost Boundary and the Tree of Knowledge which is in the Garden of Eden. In the Hadith, the different trees are combined into one symbol.

By jacksonnhccPosted on March 20, 2020March 22, 2020Posted in Home, Lent & Easter, Weekly MeditationsTagged connection, tree of life, vine and branchesNo Comments on Meditation on the vine as tree of life — connector and source — themes of hope from Hebrew scriptures, Gospel of John ‘I Am’ statements and more. 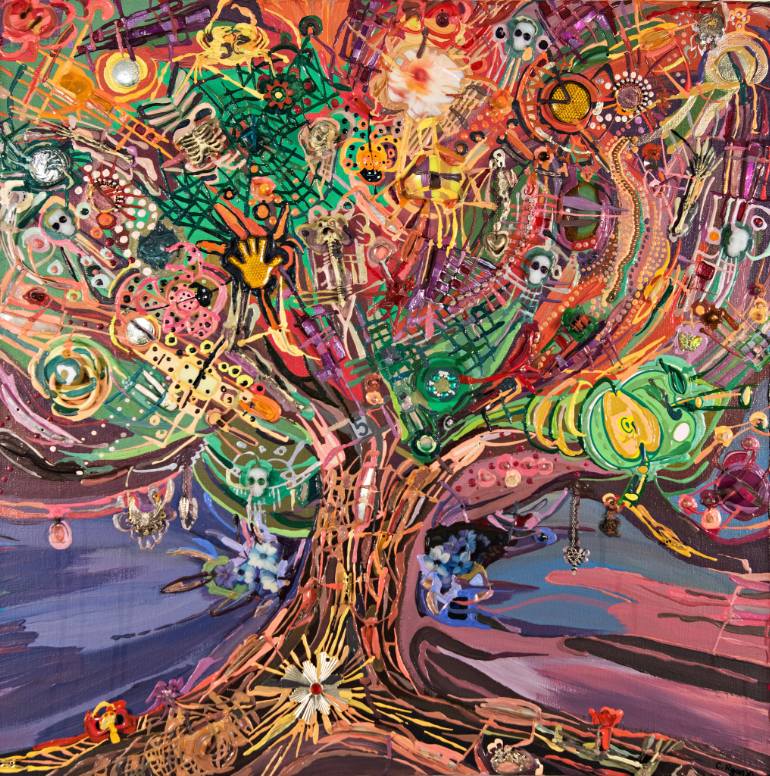 As a tree produces fruit, wisdom gives life to those who use it, and everyone who uses it will be happy. — Proverbs 3:18

Good tips on Holy Week-themed musical content. For instance, Andrew Lloyd Weber's musicals are live-streaming on Youtube. This weekend its Joseph and Amazing technical dreamcoat. Next Friday it will be Jesus Christ Superstar. Fun! More info in this article: consequenceofsound.net/2020/04/andrew-lloyd-weber-musicals-streaming-free-youtube/ ... See MoreSee Less

Andrew Lloyd Webber musicals are streaming for free on YouTube

A beautiful idea for Palm Sunday

How can we publicly acknowledge this important day on our calendar when so many of us will be behind closed doors? The Missionaries of the Holy Spirit posted this idea on their Facebook page: What if ...
View on Facebook
·Share