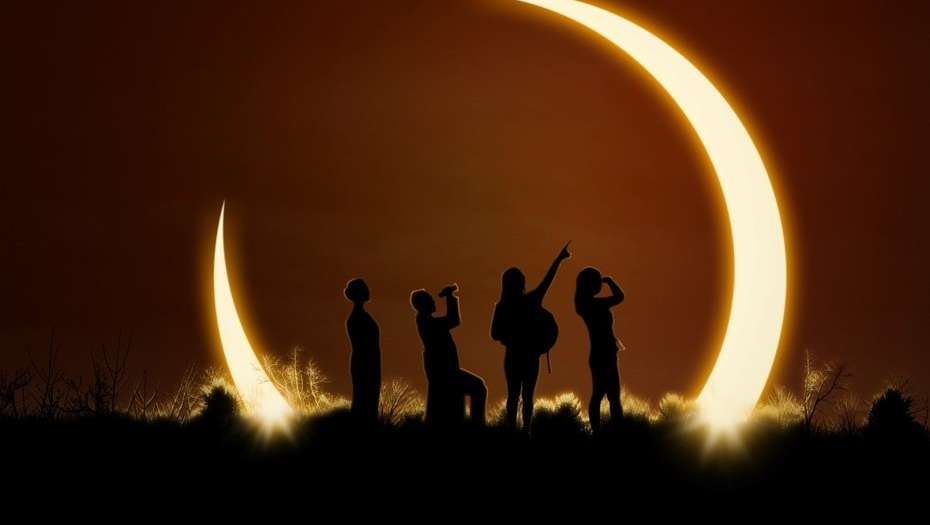 It started about noon.  On top of Mount Batte,
We were all exclaiming.  Someone had a cardboard
And a pin, and we all cried out when the sun
Appeared in tiny form on the notebook cover.

It was hard to believe.  The high school teacher
We’d met called it a pinhole camera,
People in the Renaissance loved to do that.
And when the moon had passed partly through

We saw on a rock underneath a fir tree,
Dozens of crescents—made the same way—
Thousands!  Even our straw hats produced
A few as we moved them over the bare granite.

We shared chocolate, and one man from Maine
Told a joke.  Suns were everywhere—at our feet.

Religious wars are not caused by the fact that there is more than one religion, but by the spirit of intolerance… the spread of which can only be regarded as the total eclipse of human reason. — Charles de Secondat

Tomorrow, I believe, is to be an eclipse of the sun, and I think it perfectly meet and proper that the sun in the heavens, and the glory of the Republic should both go into obscurity and darkness together. — Benjamin Wade

Yes, I am Irish and Indian, which would be the coolest blend in the world if my parents were around to teach me how to be Irish and Indian. But they’re not here and haven’t been for years, so I’m not really Irish or Indian. I am a blank sky, a human solar eclipse. — Sherman Alexie

When the moon covers the sun, we have a solar eclipse. What do you call it when birds do that? — Young-Ha Kim

Eclipse of the light of heaven, eclipse of God – such indeed is the character of the historic hour through which the world is now passing— Martin Buber

Monuments — Myra Sklarew
Today the moon sees fit to come between a parched earth
and sun, hurrying the premature darkness. A rooster in the yard
cuts off its crowing, fooled into momentary sleep.
And soon the Perseid showers, broken bits
of the ancient universe, will pass through the skin of our
atmosphere. Time and space are alive over our city.
Final eclipse of the sun, last of this millennium, our city’s
brightness broken off. We have known other dark hours:
Here, coffin that slowly passes, I give you my sprig
of lilac—Lincoln’s death, winding procession toward sleep.
We have known slave coffles and holding pens in yards
not half a mile from our Capitol, wooden palings sunk in earth
to guarantee none would escape. In this freest city. Oh if earth
could talk. Earth does talk in the neatly framed yards
where death thinks to lay us down to rest. Asleep,
the marker stones. But not the voices, jagged bits
of memory, shards of poems. Sterling Brown. Our
human possessions and all they’ve left us. This whole city
sings their songs. Say their names. In this city
they are our monuments: Frederick Douglass, our
Rayford Logan, Alain Locke, Franklin Frazier, Georgia
Douglas Johnson, Paul Laurence Dunbar, May Miller: Not sleep
but garlands left to us. Montague Cobb, William Hastie. Yards
of names. And here, the place where we unearth
an immigrant father of seven. He leans down—no earthly
reason for his choice—to pick up his nearest child. A yard-long
rack of brooms behind him, a bin of apples. Not the sleep
of cold, but autumn in Washington. 1913 or a bit
later. He stands awkwardly on 4 1/2 Street, S. W. Our
street photographer, who’s just come by with his city
chatter, ducks beneath a dark cloth. Monuments of the city
behind him, he leans over his black box camera in time to capture
that moment when the child will play her bit
part, pushing away from her father like a boat from shore. In the sleep
of winter, years later, she will become my mother. What yardstick
by which to measure importance? To measure earthly agency?
Each of us has monuments in the bone case of memory. Earth-
bound, I take my sac of marble and carry it down lonely city streets where our
generals on horseback and a tall bearded man keep watch over all their citizens.
SOLAR ECLIPSE INFO