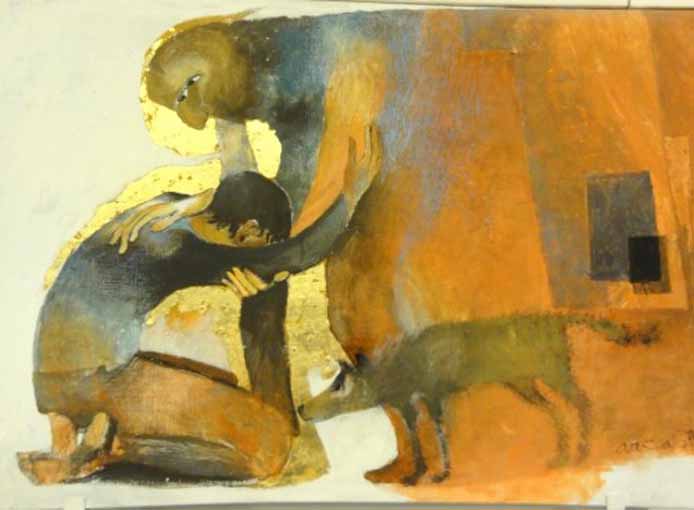 When is love prodigal? When is it wasteful and exuberant to offer compassion and welcome though it may not be merited or appreciated? Some early theologians so feared this parable of prodigal love, that they decided it shouldn’t be told or taught … it offered a model that overturned good sense and economical, societal order. When have you been prodigal and excessive in your love? And would you do it again? When have you received such impractical generosity of heart? — Rev Gail

The Prodigal Son (excerpt) — Spencer Reece
For a decade I did not speak to my parents.
Are you listening to me? I will not bore you with details.
Instead, I will tell you something new. Listen to me.
I was angry. But the reasons no longer interest me.
I take the liberty of assuming you approve of forgiveness
… we discuss blessings, absolutions, consecrations—our work of the soul.
… Mother and father, forgive me my absence.
I will always be moving quietly toward you.

Blessing that Waits to Come to Your Aid — Jan Richardson
When I have become / so reliant on myself
that I cannot see / the need that gnaws / so deep / in my soul,
open my eyes, open my heart, open my mouth
to cry out / for the help
that you do not ration, the deliverance
that you delight to offer / in glad and / generous measure.

Poem (excerpt) — Rumi
Out beyond ideas of wrongdoing and rightdoing,
there is a field. I’ll meet you there.
When the soul lies down in that grass,
the world is too full to talk about.
… You must ask for what you really want.
Don’t go back to sleep.
People are going back and forth across the doorsill
where the two worlds touch.
The door is round and open.
Don’t go back to sleep.

We’re all being loved in spite of ourselves. — Richard Rohr

I now see that the hands that forgive, console, heal, and offer a festive meal must become my own.  ― Henri Nouwen, Return of the Prodigal Son

We are so afraid of letting people off the hook. We are so resentful of unearned love. Unless we happen to be the ones toward whom the father is running, with his arms wide open and tears wetting his beard. — Barbara Brown Taylor

The eyes of mercy are quicker than the eyes of repentance. Even the eyes of our faith are dim compared with the eye of God’s love. … It means much love truly felt; for God never gives an expression of love without feeling it in His infinite heart. — Charles Spurgeon

… the prodigal figure is at work in us when we go racing through the candy store of life, unaware of the price of the going and comingor the cost. We are takers who gather everything we can to ourselves, or squander it or do nothing, and then discover that life demands back everything it gives in ways we never dreamed. — Joan Chittister

In relation to my practice, I am the prodigal son when I live in forgetfulness and self-centeredness. When I hurry … because I am attached to my agenda, I waste the precious gift of life in the present moment. When I come back to my breath, I seek the peace of mindfulness … — Mark LeMay, from Mindfulness Bell published by Plum Village (Thich Nhat Hanh’s Buddhist Sangha)

And, like the prodigal son, he had returned broken in body and also in mind to the house where he had been born … ― Catherine Cookson

The true adventurer goes forth aimless and uncalculating to meet and greet unknown fate. A fine example was the Prodigal Son — when he started back home. ― O. Henry, The Green Door

The back door beckons to a prodigal son. ― Michael Davidow

It was his home now. But it could not be his home till he had gone from it and returned to it. ― G.K. Chesterton

… and it was the son’s new revelation of his poverty of heart that propelled him back into his Father’s arms. ― Tommy Tenney

Once a person learns to read the signs of love and thus to believe it, love leads him into the open field wherein he himself can love. If the prodigal son had not believed that the father’s love was already waiting for him, he would not have been able to make the journey home – even if his father’s love welcomes him in a way he never would have dreamed of. ― Hans Urs von Balthasar, Love Alone is Credible

So when I reject my identity as beloved child of God and turn to my own plans of self-satisfaction, or I despair that I haven’t managed to be a good enough person, I again see our divine Parent running toward me uninterested in what I’ve done or not done, who covers me in divine love and I melt into something new like having again been moved from death to life and I reconcile aspects of myself and I reconcile to others around me. — Nadia Bolz-Weber

Every parent is at some time the father of the unreturned prodigal, with nothing to do but keep his house open to hope. — John Ciardi

But the real Prodigal in this story is your Father, is he not?  Over-the-top, undignified, and hair-raising in his love? —  Debie Thomas

You never depart from us, but yet, only with difficulties do we return to You. ― Saint Augustine, Confessions

This father is not content to have one child without the other; he advocates for and seeks out both. — Barbara Brown Taylor

When the prodigal son returned … The father accepts his son with loving-kindness and rejoices at his return. He greets the prodigal son warmly and rejoices at his return. The father’s response is a model for how I can treat myself when I stray from the path of mindfulness … I try not to cling to or repress my shame and anger. I notice these feelings and return to my breath. My feelings cannot be removed with aggression. I recognize them as part of the fold, and each time I return to the path, I say to myself (paraphrasing Thay), “I have arrived; welcome home.” — Mark LeMay, Mindfulness Bell published by Plum Village (Thich Nhat Hanh’s Buddhist Sangha)

… let us remember that God is the prodigal Father, who refuses to give us the love we deserve, but instead who gives the love we need.  … who waits patiently for His lost children to return. When He sees us from a long way off, He runs to welcome us. … feels our absence … steps outside to be with us, and waits patiently for our response. — Barbara Brown Taylor

The father wants not only his young person back, but his elder son as well … The father … wants both to participate in his joy … Thus the father’s unreserved, unlimited love is offered wholly and equally. He does not compare the two sons. He expresses complete love according to their individual Journeys. — Henri Nouwen

Older Child: The One Who Stayed Home, Yet Was Also Lost

… But here’s your vindication: the power in this story is yours … Your Father stands in the doorway, awaiting your company. You get to write his ending. What will you do, as the music grows sweeter? What will we choose, you and I? — Debie Thomas

There are many elder sons and elder daughters who are lost while still at home.― Henri Nouwen

The fatted calf, the best Scotch, the hoedown could all have been his too, any time he asked for them except that he never thought to ask for them because he was too busy trying cheerlessly and religiously to earn them. ― Frederick Buechner

The older son squandered his freedom by not thinking he had any. He didn’t believe that all that was the Father’s was his. He squandered the gifts of the Father by living a life of mirthless duty. And coming home from the field he hears the party underway and resents such a lavish show of love thinking it a limited resource. He was being a complete ass and yet again, the Father comes to him reminding him of the great love he has for his child. — Nadia Bolz-Weber

The third character, the elder son, remained faithful to his father while his younger brother squandered his inheritance. … The story does not explore the elder son’s feelings, aside from his anger. I can easily imagine him also feeling resentful, wounded, and suspicious. These feelings are familiar, for I have held them toward others and towards myself … I wake up to the suffering caused when I stray from mindfulness, I feel critical and suspicious of myself … I sometimes feel the sting of shame … I feel both the guilt of the prodigal son, and the angry suspicion of the elder brother toward myself … Each time I catch myself living in forgetfulness and feel the prodigal son and his brother in my heart, I try to remember the father. — Mark LeMay, Mindfulness Bell published by Plum Village (Thich Nhat Hanh’s Buddhist Sangha)