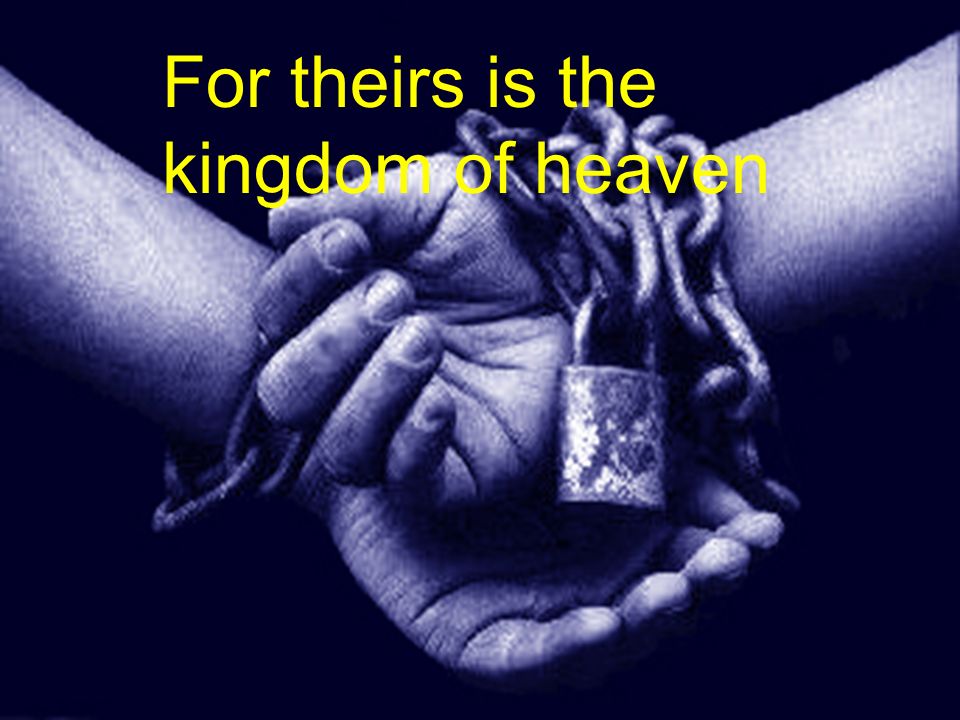 We heard this phrase earlier in the Beatitudes. The Kingdom of Heaven is another way of saying God’s Kingdom. It means that you ‘who are persecuted for righteousness sake’ — from Matthew 5:10— belong to God. God has adopted, embraced, welcomed and claimed you. The Message version of the Bible says, ‘The persecution drives you even deeper into God’s kingdom.’

The Beatitudes have been building up, and by the time we get to the end of them, we ought to identify ourselves as being claimed by God. Even when we’re imperfect and messy, we’re part of the Kingdom.

If you look at the people whom Jesus chose for companions, it’s a great argument that the Kingdom of Heaven isn’t full of winners and heroes and saints. It’s full of folks we’d probably recognize. And maybe we’d avoid inviting some of those rough characters to dinner, yet Jesus would open the door and pull up a chair for everyone.

Due to the awkward phrasing, readers might mistakenly interpret the Kingdom of Heaven in this blessing to mean that the persecuted are headed away from Earth, being called to some far-off divine paradise in the skies, beyond death. Yet readers would be mistaken.

Grammar changes the meaning! The Forerunner Commentary writes, “The word “of” denotes possession, not location: It is Heaven’s Kingdom … it is the Kingdom of Heaven, not the Kingdom in Heaven, although its headquarters is in heaven.” A different scholarly source adds, “This phrase, the kingdom of heaven, is used thirty times by St. Matthew. The other evangelists, and St. Paul, term it generally, the kingdom of God, and sometimes, the kingdom of Christ. These different phrases mean the same thing.” The writers of Matthew and other Gospels used these terms interchangeably.

In other words, those who receive this Beatitude, this blessing, belong to God’s kingdom here. Here on earth. After all, they’re experiencing persecution here and now. They belong in the company of God’s loving presence among the people living on earth here and now.

Here and now. Not later. Not somewhere else. After all, God is among us, with us, always. And we’re right next to Godself, in God’s presence, all the time, even if we don’t know it. God has wrapped the Kingdom of Heaven around us. — Rev Gail

A new world. A better world than has ever been seen. There, you are not what you are born but what you have it in yourself to be. A kingdom of conscience, of peace instead of war, love instead of hate. That is what lies in the end of a crusade. A kingdom of heaven. — Ridley Scott

Therefore, the kingdom of heaven is both now and not yet. It is present and it is future. — Tim Barnett

By jacksonnhccPosted on July 30, 2017January 29, 2018Posted in Home, WorshipTagged kingdom of heaven, parableNo Comments on Sermon: The Kingdom of Heaven is Like …

JCC 072317 – Mustard Seeds and Wild Weeds from architect on Vimeo.