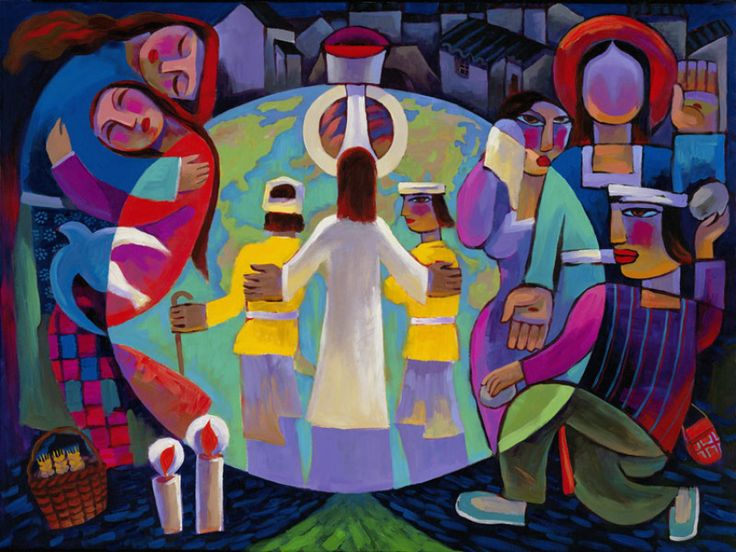 Here is another phrase that means for righteousness’ sake. Christ blesses, specifically, those who experience insults, libel, slander, being reviled and/or persecuted, because they love and follow in his Way.

He addresses those who now identify as his followers and disciples. Yet he also addresses seekers who are curious and engaging with his Way.

Who, in our times, is persecuted for their faith? Often whole groups of people are persecuted for a ‘monolithic’ identity that has been assigned to all of them.

Since 9/11, fear and bias of Muslims has grown in the US. More people now hold negative views of Muslims, conflating the religion with terrorism or extremism, and projecting those biases and concerns onto anyone might be a practitioner of Islam.

Imagine assuming that to be Jewish is ‘one thing.’ Judaism has a wide variety of expressions, as do many religions. And some people experience it as a cultural identity rather than a religious one.

Imagine lumping all Israeli Jews and Palestinians under those two labels, as if those categories represent the whole reality of a person’s identity. As if those two terms can embody the multitude and complexity of thoughts, feelings, views, and experiences held by the individuals who might align with those affiliations.

Consider that within Islam, different groups have longstanding enmity. Shiites and Sunnis, for instance, have historic conflicts in some regions. Yet to assign a person a whole identity, based on one aspect of his or her religious affinity, underestimates the complexity of historical and current religious, ethnic, cultural, and social realities.

Consider mistakenly believing that to be Christian is ‘one thing.’ Some people don’t even understand that all Christian movements grew out of Catholic and Orthodox traditions. Think of the Protestant and Catholic wars that have raged in the past and now in places like Ireland.

Even in current times, belonging to the wrong religion, in some nations, can be a death sentence. Genocides have been committed against Muslims, Hindus, Christians, Jews, Buddhists and others.

People are often persecuted for growing up inside a religion, even if many of the underlying causes of the conflicts aren’t ideological, but social and political and economic. Individuals are sometimes held accountable for the wrongs and hurts inflicted by religious institutions, even if the individuals who practice that faith didn’t commit those wrongs. They have been assigned, in such cases, a role as spokesperson for an entire faith. Yet can any individual speak on behalf of a whole faith?

These are a few ways that people might, in our times, be persecuted for faith. Let us recognize that the condition of being persecuted for one’s faith isn’t limited to a Christian experience. At this point, Christians are less likely to be persecuted than most other religions, since many countries identify, at least culturally, as Christian-majority nations. Yet it happens.

Again, this Beatitude names a broad human experience. In the most ideal understanding of this Beatitude, all people who are judged and harmed for standing up for or being connected to a faith are encompassed by this blessing. ‘On my account’ becomes the language that holds open the door for all people to be welcome into God’s Kingdom, since it represents Christ’s inclusive, expansive form of agape love. — Rev Gail

I’ll tell you one thing for sure: once you get to the point where you’re actually doing things for truth’s sake, then nobody can ever touch you again because you’re harmonizing with a greater power. — George Harrison

He that does good for good’s sake seeks neither paradise nor reward, but he is sure of both in the end. — William Penn

For God’s sake hold your tongue, and let me love. — John Donne

The arts are not a way to make a living. They are a very human way of making life more bearable. Practicing an art, no matter how well or badly, is a way to make your soul grow, for heaven’s sake. — Kurt Vonnegut

It is only for the sake of those without hope that hope is given to us. — Walter Benjamin

Question or Challenge: Who embodies God for you? On whose account would you be moved to get involved in an ethical cause or activity? Would it sometimes be someone who is authoritative, influential, persuasive, or powerful and invites you to participate? Or might it be someone who needs your help and support and motivates you to take action? This isn’t a right/wrong, either/or scenario. Just a prompt to learn where we might experience the presence of Christ in our lives, inviting us into ethical engagement.

By jacksonnhccPosted on March 26, 2021March 23, 2021Posted in Home, Lent & Easter, Weekly MeditationsTagged Beatitudes, blessed, blessed are the persecuted for righteousness sake, daily devotional, easter, for my sake, lent, on my account, persecutedNo Comments on Lenten Devotional – FRIDAY, Mar 26: ON MY ACCOUNT