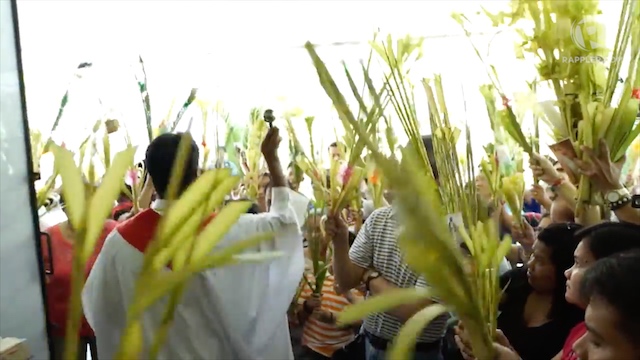 Themes from Gospel of John for Palm Sunday.

Help Now! That’s what hosanna actually means. On Palm Sunday, we celebrate with the word Hosanna, but what we’re actually doing is calling out for rescue, for intercession, for help. Immediately. Right now.

When do you need help for yourself? Yet how hard is it to receive help, instead being the one with the capacity and resources to offer help? This is the puzzle and the blessing: how we become hope for others by accepting hope for ourselves, too. — Rev Gail

Tigers Above, Tigers Below

There is a story of a woman running away from tigers. She runs and runs and the tigers are getting closer and closer. When she comes to the edge of a cliff, she sees some vines there, so she climbs down and holds on to the vines. Looking down, she sees that there are tigers below her as well. She then notices that a mouse is gnawing away at the vine to which she is clinging. She also sees a beautiful little bunch of strawberries close to her, growing out of a clump of grass. She looks up and she looks down. She looks at the mouse. Then she just takes a strawberry, puts it in her mouth, and enjoys it thoroughly. Tigers above, tigers below. This is actually the predicament that we are always in, in terms of our birth and death. Each moment is just what it is. It might be the only moment of our life; it might be the only strawberry we’ll ever eat. We could get depressed about it, or we could finally appreciate it and delight in the preciousness of every single moment of our life. ― Pema Chödrön

HELP For Ourselves; HOPE for Others

Non nobis solum nati sumus. (Not for ourselves alone are we born.) ― Marcus Tullius Cicero

The purpose of life is not to be happy. It is to be useful, to be honorable, to be compassionate, to have it make some difference that you have lived and lived well. ― Ralph Waldo Emerson

No one is useless in this world who lightens the burdens of another. ― Charles Dickens

When we give cheerfully and accept gratefully, everyone is blessed. ― Maya Angelou

Doing nothing for others is the undoing of ourselves. ― Horace Mann

It’s not enough to have lived. We should be determined to live for something. May I suggest that it be creating joy for others, sharing what we have for the betterment of personkind, bringing hope to the lost and love to the lonely. ― Leo Buscaglia

My job isn’t to fix or rescue or to save. It’s to accompany, see people, listen to them. — Greg Boyle

A lot of the time we don’t know when we’re surrendering that we’re actually, at the same time, maybe establishing connection … to a power greater than ourselves — or something in the next concentric circle out whose name is not me. So, that to me is where help begins. You know, we’re often ashamed of asking for so much help because it seems selfish or petty or narcissistic, but I think, if there’s a God — and I believe there is — that God is there to help. That’s what God’s job is. — Anne Lamott

But what I didn’t know until this week is what the word “hosanna” actually means.  All these years, I thought it meant some churchy version of “We adore you!” or “You rock!” or “Go, king!”  It doesn’t. In Hebrew, it means something less adulatory and more desperate.  Less generous and more demanding.  It means, “Save now!”  — Debie Thomas

The Hebrew word Halleluia means “praise the Lord;” Hosanna means “save us!” or “save!” — Steve Vredenburgh

“Hosanna” does come from an old Hebrew phrase, but one that was less praise and more desperate plea. “Save now!” It was a phrase stripped of all pretense of politeness. “Help!” Its insistent cry was one reserved for royalty or divinity. “Deliver us! Don’t wait!” The people are either calling Jesus “king” or “God” or both. … My own mind is drawn today to Anne Lamott’s book … Help, Thanks, Wow: The Three Essential Prayers. In it, Lamott says that all prayers boil down to these three simple words: help, thanks, wow. And more often than not, these concepts overlap and run together. … I think a truly holy Hosanna can hold these three words together, this help, thanks, and wow. Hosanna cries for deliverance. It calls out in gratitude. And it gives voice to holy awe. — Marthame Sanders

Love — Rumi
Are you fleeing from Love because of a single humiliation?
What do you know of Love except the name?
Love has a hundred forms of pride and disdain,
and is gained by a hundred means of persuasion.
Since Love is loyal, it purchases one who is loyal:
it has no interest in a disloyal companion.
The human being resembles a tree; its root is a covenant with God:
that root must be cherished with all one’s might.
A weak covenant is a rotten root, without grace or fruit.
Though the boughs and leaves of the date palm are green,
greenness brings no benefit if the root is corrupt.
If a branch is without green leaves, yet has a good root,
a hundred leaves will put forth their hands in the end..

It is the nature of the strong heart, that like the palm tree it strives ever upwards when it is most burdened. — Philip Sidney

The olive branch has been consecrated to peace, palm branches to victory, the laurel to conquest and poetry, the myrtle to love and pleasure, the cypress to mourning, and the willow to despondency. — Dorothea Dix

Marcus Borg and John Dominic Crossan argue that two processions entered Jerusalem on that first Palm Sunday two thousand years ago; Jesus’s was not the only Triumphal Entry.   Every year during Passover — the Jewish festival that swelled Jerusalem’s population from its usual 50,000 to at least 200,000 — the Roman governor of Judea would ride up to Jerusalem from his coastal residence in the west.  He would come in all of his imperial majesty to remind the Jewish pilgrims that Rome demanded their complete loyalty, obedience, and submission.  The Jewish people could commemorate their ancient victory against Egypt and slavery if they wanted to.  But if they tried any real time resistance, they would be obliterated without a second thought. As Pilate clanged and crashed his imperial way into Jerusalem from the west, Jesus approached from the east, looking (by contrast) ragtag and absurd.  Unlike the Roman emperor and his legions, who ruled by force, coercion, and terror, Jesus came defenseless and weaponless into his kingship.  Riding on a donkey, he all but cried aloud the bottom-line truth that his rule would have nothing to recommend it but love, humility, long-suffering, and sacrifice.  — Debie Thomas

And so there were two groups on that first Palm Sunday. There were the religious fanatics who said, “Jesus, give me a miracle and then I will believe.” And then there were the political fanatics who said, “Restore our freedom and get rid of the Romans.” Both groups chanted, “Hosanna to the Son of David. Hosanna to the Son of David. The king of Israel has come.” And that is the way it was. It was a carnival. It was a circus. It was revolution on the move. What was Jesus doing? What was Jesus doing with this mass of humanity around him? What was Jesus doing in the midst of this psychedelic kaleidoscope of madness? Was he standing up on the back seat of his chariot and waving to the crowd like some politician? Was he riding on that chariot with arms upward and outward and his fingers spiking a “V” sign for victory? Was he waving at all those people in their second story windows as they were throwing confetti on him? Was he pumping them up with political oratory to get the political revolution moving? No. Here in this cacophony of craziness, Jesus didn’t say a word. He rode in silence. Silence. — Edward Markqart